The Mid Suffolk Light Railway appointed Ugly Studios as an Advisor to their Round 1 HLF Funding Bid. Ugly Studios would be focussing on the new display plan to support their application, concentrating on creating a small display area of the newly designed replica workshop and engine shed, which would host a newly restored engine.

Both Ugly Studios and the MSLR wanted to design displays that support the wider reaching educational plan of the museum, so it was decided that the plan should centre on two visitor groups: School Groups and Families. Physical interactives, an accessible engine cab replica and dressing up costumes engage younger visitors, whilst double-sided and multifunctional displays maximise capacity for interpretation in a small space. We designed a suite of messages and learning objectives to suit the museum’s visitors and opted for modular and self contained displays to allow them to dip in and out of what interests them, whilst being encouraged to visit other sections.

Though the MSLR didn’t submit their application to HLF due to an organisational restructure, the Museum are moving forward with the display plan and concepts with the intention of funding the project themselves in the future. 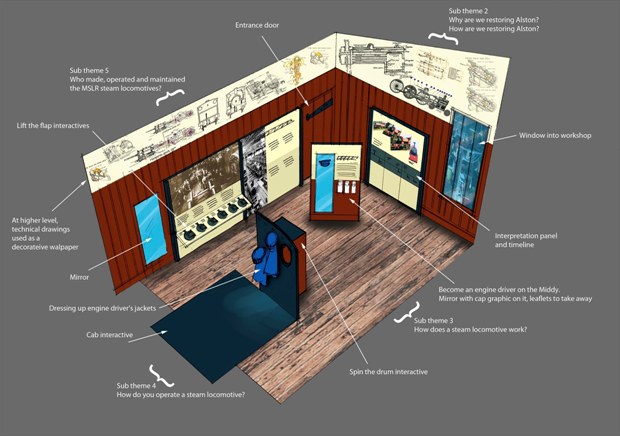